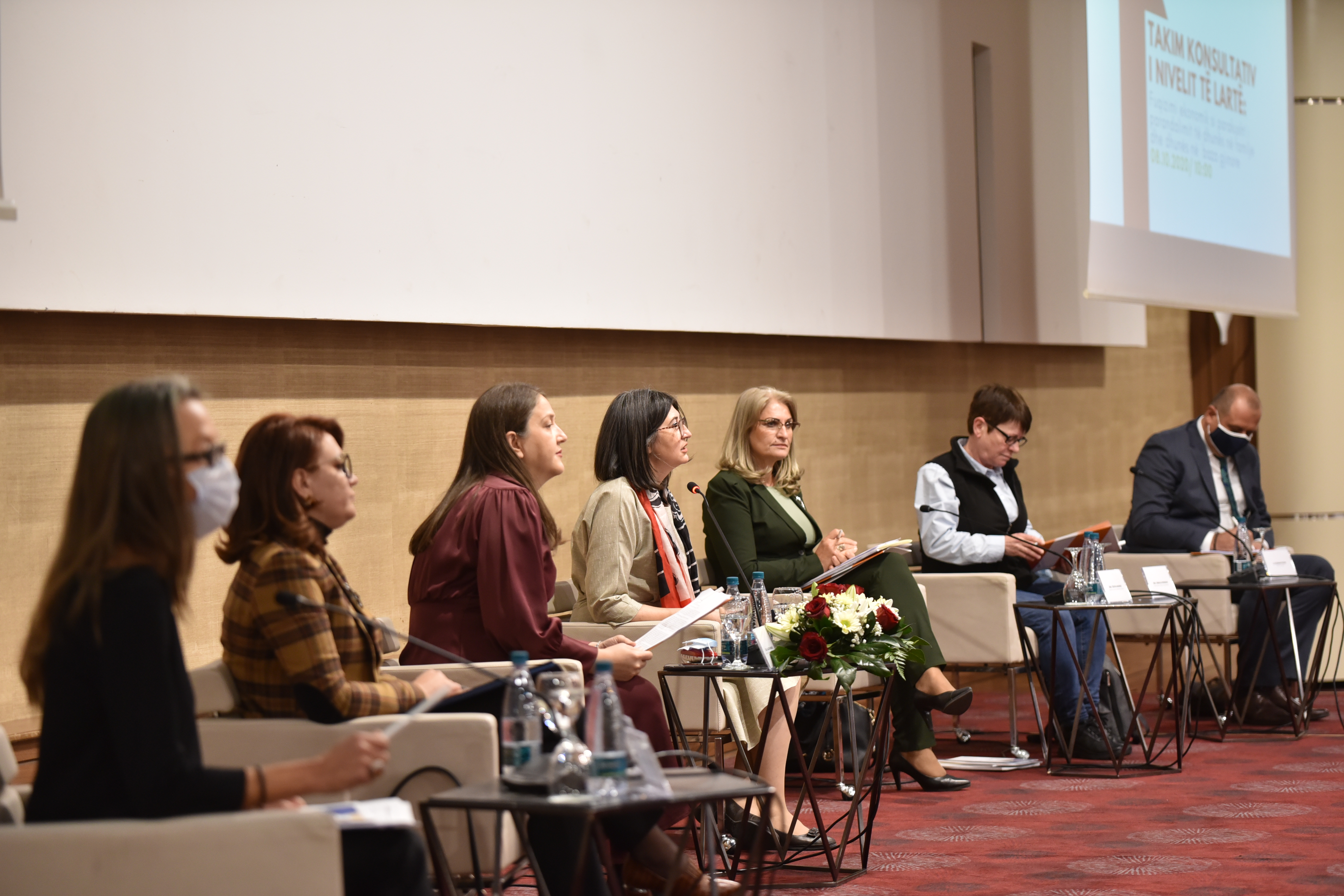 The Agency for Gender Equality in cooperation with Kosovo Center for Gender Studies has organized a consultation meeting in higher level where participated The prime Minister of Republic of Kosovo Mr. Avdullah Hoti, Ambassador of Sweden Karin Hernmarck Ahliny, Ulrike Richardson of the program of UN for development (UNDP), Igballe Rugova, Executive Director of Kosovo Women Network, the representatives of civil society as well as politics, etc.

Through a consultation meeting on high level: Economic Empowerment as precondition for domestic violence and gender based violence, today in Prishtina, two events were marked with historical importance for gender equality- 25 Anniversary of Bejjing Platform and 20 Anniversary of Resolution 1325 “Women, Peace and Security”.

The Chief Executive of Agency-Edi Gusia stressed that “In 1995, when 189 countries of world unanimously have approved the Bejjing Platforma for Action, Kosovo was passing through history of violence and repression and in that situation Kosovo Women were having essential role in residence movement and independence. 25 Years after Bejjing Platform, Kosovo is one of youngest democracies in the world that has achieved:

To approve CEDAW Convention in its constitution and in the end Istanbul Convention,

While, the Director of Kosovo Center for Gender Studies, Lule Demolli expressed that “ The violence and continual threat in our reality. Except the fight of violence it should be reflected in economic development of Kosovo Women. Many women have lost their job due to Covid 19. Many women have closed their business are over bounded financially. Also it is worrying the lack of representation of women in negotiations and peace building.

Among others she stressed that –I want to close my speech with three words- Mobilization, responsibility and equality, she stressed,

The Prime Minister of Kosovo, Mr. Avdullah Hoti said that Kosovo Society has advanced enough to promote and awareness for gender equality, while the situation in the ground does not entirely reflects this awareness.

“Presentation of violence towards women is reflection that there is a lot to be done. The pandemic has given other direction to world. Jobs that are possessed by women are more sensitive, therefore within the Package for Economic Recovery, despite the support that businesses receive”, we have a special package to support women in business, expressed Hoti.

The Ambassador of Sweden in Kosovo, Karin Hernmarck Ahlinz stressed that it is very important to address the subjects in today-s conference.

“Women are people, not only with systematic work, but if you don’t give support to women you will fail as society. Social empowerment is a key element and very important. There are cases where the victim is feeling very ashamed and not the violator. Economic empowerment means autonomy and chance to be away from the bond that you are not considered as human being”, stressed Ahliny.

For Ulrike Richardson form UN Program for Development (UNDP), if women would enter more in economy, Kosovo could have a yearly budget more than Three Billion Euro.

“I would recommend that Resolution 1325 should be taken in account in Kosovo. COVID 19 had a large impact, so that I cannot say for women, because it had affected all, but some has affected more than others. If we see within countries we can notice inequality of COVID 19, which has impacted those who are more vulnerable. We can see that the majority of these categories are women”, she said in today organization.

According to Igballe Rugova from Kosovo Women Network – Women organizations have worked so much, but I think that this year we have turned reverse the gender equality. It was reverse and there many factors. The main factor is political will that has pushed this agenda further. We don’t

She informed that the Lawmakers would take the initiative to reimburse financial means of women in Kosovo, the means will be withdrawn from Pension Saving Trust.

“At the end we have enrolled the Istambul Convention to advance further the legal framework and concrete steps are undertaken for the Plan for Gender Equality 2020-2023. This program should serve as referring platform to allocate funds for integration of gender perspective in policymaking”,

Presentation of Report, Gender Gap in salaries was done by the Expert for Gender Issues Mrs. Adriana Gashi. The data of this report was based on actual situation witnesses one more time that the presence of inequality and structural socio-economic exclusion continues to impede the empowerment the role of women in society,