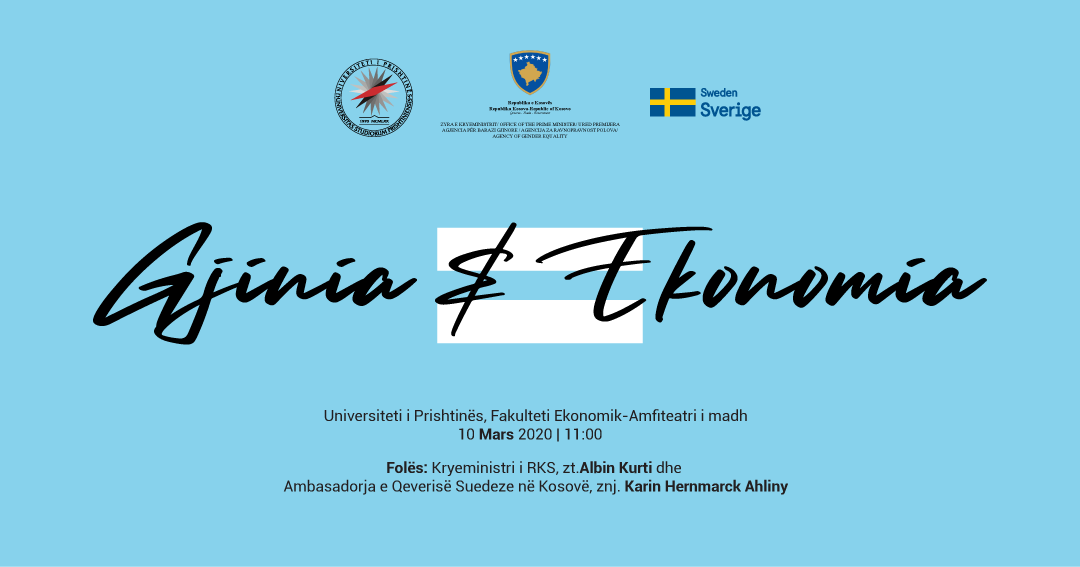 On a raw of activities to mark 8 March, Internationla Women’ s Day, the Agency  for Gender Equliy/ OPM in cooperation with Faculty of Economy, University of Prishtina,  todaz n 10 March 2020 has organiyed the common activity to finalie the ne subject “Gender and Economy” as a new subject within the Branch of Economics. In this occassion AGE handed over a fund of 5 Academc Titles (24 copies) for the library of Faculty of Economy wich will serve for students that attend this subject. This initiative ws supported by Goverment of Sweden- SIDA execued through the project of technical assstance for AGE.

The Prime Minister of RKS Albin Kurti during meeting said that it is alarming that 80 % of women are out of labor market. According to him without gender equality we lose the human rights and democracy. Kurti promised building Kindergartens, Houses for Elderly people to enable gender equality. Among others, he stressed that every law or regulation will be run by the principal of gender equality.

While the Chief of Executive of Agency for Gender Equality Edi Gusia stressed that it is important to know the unpaid contribution of women as a part of economic contribution which ensures welfare and economic development of country. Women and men in Kosovo historically have contributed but still it is not evaluated what it is deserved by society, therefore the new subject within the Faculty of Economy “Gender and Economics” which will enable and ass and open the way to acknowledge the contribution of women for sustainable development of country.

The Ambassador of Embassy of Sweden in Kosovo Karin Hernmarck Ahlinz said that the power of woman can change everything if faced with many difficulties due to discrimination. According to her, the gender equality should be respected so that to unable women greater inclusion in employment and decision making. She added that a large number of women do not end their studies; since they should take care about the house and children.

The Dean at Faculty of Economy But Dedaj, stressed that Kosovo is a first country in the region to start with new subject “Gender and Economics”. During his speech he said that despite the progress in inclusion of women in labor market there are still differences due to unequal separation, discrimination in employment etc. According to Dean, from all data collected from SOK in 2018 only 18.4% women were active at labor market.

Blerinda Idrizi, Team Leader of Project for Technical Assistance for AGE executed from Consortium Niras CPM International. During presentation she stressed that Kosovo in this 20 years was a country of testing the ideas and creating the models from international community to advance ideas, norms and values that promote human rights, especially gender equality.

Even though, models that survive and would core culture in Kosovo Society, there are those to create, rebuild and represent from citizens itself of Kosovo and protected and develop from them. As a project, we have presented ideas and models, concepts and instruments. University as ingle of knowledge has embraced the ad has given contribution in creation of subject “Gender and Economics”.

It is important to see and evaluate the commitment to the cause  of gender equality and while there is commitment, positive changes and advance of gender equality agenda of Kosovo is sustainability of assistance of Government of Sweden, of out attempts an experts it was secured from enthusiasm, contribution and actual courage from academic staff, students and whole institutions of Kosovo to create models of all-inclusive economic development, models of social equality and social transformation.

Presentation of subject ’Gender and Economics’ and handover of books at Faculty of Economy derives from  AGE Cooperation Agreement with University of Prishtina, where review of education curricula  was initiated new subject “Gender and Economics”.